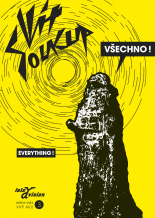 A complete edition of films and remaining footage of live performances of Vít Soukup. In the package are two DVDs, a catalogue with the texts of Terezie Nekvindová, Ivan Mečl, Radek Wohlmuth and a commented filmography with Vít Soukup's drawings for the original VHS case. In Czech and with English subtitles. Published in cooperation with VVP AVU.

“Our pseudo-lives were nothing but speech bubbles. [...] We desecrated everything. […] We ground [it all] to dust,” says Vít Soukup as the pessimist Drudge in the series Old Mates (1993). His approach to films was similar. He made works full of ironic references to high culture and low, and enjoyed using clichés in their raw state. He desecrated, belittled, emptied, and thus could express fundamental truths that, undisguised, would have sounded too banal. In fact, based on his Suppository Theory, he wanted to prescribe his “homeopathy of Banality” to all the fine arts of that time so that they might break free of their elitist incomprehensibility.
Although he had established himself as a painter and his cinematic efforts may strike the viewer as mere entertainment, he created his “moving pictures” in all earnestness. He used stereotypical characters and a lighthearted “playing at acting” in order to present fundamental life issues. He worked with the antithesis of good and bad, the figure of the guardian angel, the yearning for a solid underpinning, his relationship with his father, and the motifs of death and loneliness. He talked about spirituality using, among other things, metaphors of nature and the universe, and provided a counterbalance to pathos by ridiculing caricatures of spirituality in the form of New Age and other trends. He consciously used references and citations as a postmodern strategy (which the Czech art scene was just beginning to discuss in the 1990s): he shot variations on Westerns, rural dramas, Czechoslovak communist-era television series, detective stories, silent slapsticks, and more. In so doing, he drew on the reservoir of stories and images shared by all those who had grown up on Czechoslovak Television’s normalization-era production monopoly.  His films are also “period” films in the positive meaning of the word: they show certain typical characters of the 1990s, such as the private businessman with zero good taste and bad intentions, or the artist in search of his identity at the dawn of the “new era”. Some of the locations and homemade props were not just ridiculous-looking out of necessity, but helped to create a certain sense of detachment (a canteen kitchen served as a scientific laboratory, a Gothic ruin stood in for a half-built cathedral, and dangerous exotic snakes were “played” by children’s candy, to name a few examples). Soukup’s points of reference – Dadaism (in particular the legacy of Marcel Duchamp) and postmodernism – found themselves in a cocktail of sense and non-sense, construction and de-construction. Seen on the surface, his films are trivial entertainment, but encoded within them is a sense of catharsis and they open up a vista onto “landscapes without time and space”...