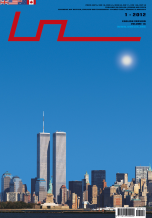 This issue of the international magazine Umělec has been released, this time with a focus on America. The “American issue” contains articles, essays, comic strips, and art by authors not only from America, but also Great Britain, Germany, Moldavia, Canada, Czech Republic, and Mexico. As in the past, Umělec approaches its subject without any clear-cut opinions. Neither adopting nor avoiding popular viewpoints, eschewing summary overviews and generalized analysis, Umělec refuses to focus on contemporary issues, or journalistic adventures in the interest of balanced representation. Although the magazine does not ask what today’s America is like (in fact, its poses no questions at all), it offers highly interesting, original, and colourfully illustrated answers. A selection of the magazine’s contents: In the introductory essay, American poet Kenneth Goldsmith looks at the issue of today’s circular criticism (not just within poetry), and uses his visit to the White House to illustrate his proposal for taking a stance on the question of criticism and engagement. In an excerpt from his book on the monsters of the market, David McNally presents a horror-scenario-inspired analysis of contemporary capitalism. Pablo Helguera’s play compares forms of grandeur within the musical career and geopolitics of the New World. Author Jan Wollner goes in search of the architectural inspirations for Fritz Lang’s Metropolis. Louis Armand analyses the non-trivial characteristics of Joshua Cohen’s literary work, subsequently illustrated by Cohen’s story McDonald’s. Anyone with the courage to read two excerpts of British Philosopher Nick Land's work as more than a literary experiment will appreciate Robin Mackay’s introduction to his oeuvre. Douglas Dix turns a detective’s eye towards the art of the Cold War – not in order to find the murderer of a young well-connected artist, but to discern the extent to which the worlds of politics and art were blind towards their interconnection. In what is perhaps the issue’s most focused text, Octavian Esanu dissects a spirit that both welcomes and rejects its Americanization. The issue closes with a text by the Pil and Galia Kollectiv that, however unintentionally, comes full circle with Goldsmith’s opening remarks, plus Spunk Seipel’s indignant diatribe on one African dictatorship and Tony Ozuna’s observations on censorship in the America media.