Ivan Martin Jirous: My itinerary has been monotonous for quite a while

Ivan Martin Jirous: My itinerary has been monotonous for quite a while 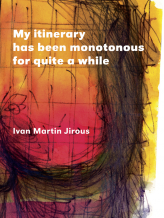 "Jirous was unique, a historian, a poet, a rock-and-roll magus, a brave spirit whose life testified that culture is politics."

There were three key moments in my life: when I first heard rock’n’roll music in the late 1950s, when we founded the Plastics with my friends, and when I met Ivan Martin Jirous."

(Milan Hlavsa, founder of The Plastic People of the Universe)

Imprisoned poet, art historian, band manager of The Plastic People of the Universe, and free-spirit under all circumstances, Ivan Martin Jirous (1944-2011) was together with Václav Havel one of the key personas of the Czechoslovak cultural opposition, representing its rawer, underground part. Affectionately nicknamed Magor (The Loony) by his friends, he spontaneously brought people together and organized numerous underground concerts and happenings, breaking the feeling of isolation many shared in the gloomy period of 1970s normalization. A force of nature with a legendary wild demeanour, Magor’s uncompromising approach to life and society is still inspiring today.

Sensitively translated by Marek Tomin, My itinerary has been monotonous for quite a while is the first collection of Jirous’ work published in English. The selected poems, often revealing his tender and even pious side, were written while he was in Valdice prison in the 1980s and later published in Czech as the award-winning Magor’s Swan Songs. While imprisoned, he also wrote a book of short stories and poems for his daughters Františka and Marta, some of which are included in this anthology.