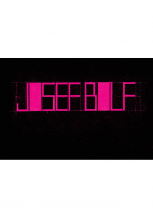 „Setting form and technique aside, let us focus on content and reaction. Since 2008, Josef Bolf has been recognized as a successful painter. For a country that has never been so pleasant to live in as now, this implies the popularity of a painter whose work features various catastrophes, moments of despair, depressing images of human solitude, and scenes of universal horror. Transcending common taste, he is attracted to horror—his work draws from comics, pop c ulture and even kitsch. These are strange preconditions for success and a strange face of culture, unless we believe that we most long for that which we lack, even though it may disrupt accepted values. In periods of prosperity, our civilization, like its historical predecessors, has focused on its dark side, morbidly relishing death and decay. Bolf can be placed in the tradition of artists, poets and rock stars who provide us with works of full of anxiety, destruction and perversion. Haunting and poignant, he is attractive. Sometimes he is an emotional blackmailer freely forthright about his methods, and we contentedly give in. As to the alluring power of Bolf’s recent work, his spectators empathize with the artist’s urge to dissect his own trauma; not only his personal demons, but those with which many spectators can also identify. Bolf does not so much speak for himself, as he does for an entire generation.“

...
„Each and every evening, millions of people attentively gaze at the flooded cellars of more than twenty families, or a car hugging a tree by the highway with everyone inside dead. Petty catastrophes are sometimes substituted by a great one - perhaps some unimaginable threat: mosquitoes carrying malaria or madmen putting razors in baby food. It is as if our civilization always requires new reasons to live in fear, constantly looking for scenarios of possible catastrophes. We are keen observers of distant misfortunes, comforted with a passing sense of security brought by the daily news.“
...

From text by Tomas Pospiszyl