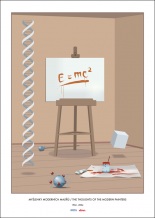 
„Wo bin ich?“, cried the confused George. When lightness comes, mostly we donʼt manage to enquire whether we are in Bajkonur or in Cape Canaveral. GEORG BASELITZ (born 1938]*Equal dilation, the freedom of elements, bent brotherhood – these were the real ideas of French fury in the 60s. BEN VAUTIER (born 1935)*Cézanne knew only Mendelejevʼs tabular book of recipes. Therefore nobody would like the taste of the apple benzine strudel, to which Paul as a pre-cubist-Aix-en-Provencal scullion came to after many years as a patrimonial recluse. PAUL CÉZANNE (1839 - 1906)*As soon as his favourite watch began to stink, Salvadorʼs correspondingly foetidly swampy mood deepened. Fortunately Gala had another of her magnificent delirious brainwaves! SALVADOR DALÍ (1904 - 1989)*To the successes of Soviet science we can also add the second discovery of the cell. The politically vacuous world was shaken to its foundations. Fortunately Vasilij was a macrocosmic refugee. WASSILY KANDINSKY (1866 - 1944)*He managed to resolve the pitfall of utopian urbanism by the reddest truth – by a block of flats. LAZAR MARKOVIČ LISICKIJ (1890 - 1941)*An indistinct vision of the turn of the century. Through cigar smoke there is visible a steel tower similar to a fleshy Slavic outline. “Alfons, why did you go away from your epic native land“, cries out Ilja Muromec from the gentle Říp. The nipple of Saint George nods in agreement. ALPHONSE MUCHA (1860 - 1939)*The pain and redemption of the Russian nation – how we know both from close up. Mother Theresa and Leni Riefenstahl would be delighted – God be praised, Kasimir was like a mother. KASIMIR MALEVICH (1878 - 1935)