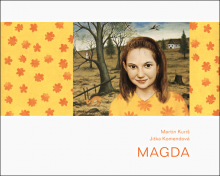 - - - - -
A small white cottage stood in a little clearing, not far from a forest. All sorts of people might say it looked like something from a fairy tale. But it wasn’t. It was just a simple house all by itself, and Mrs. Saunders lived in it. Even she was hardly any fairy tale grandmother—she was little Tommy and Magda’s grandmother. A few steps from the house, sun beams danced upon a small pond from whose cold water the draping tips of surrounding willows’ branches quenched their thirst. Such a magically secluded place would enchant grown-ups, but Magda thought completely differently. What bothered her most was that she had no friends there. Town was far away, and grandmother didn’t want to let her go off alone; something might happen to her. What idiocy. If only the girls could come visit, it would be much nicer.
“Ah well, If I were that big,” Magda thought to herself as she tossed her younger brother from one arm to the other and tickled him under his chin (which always worked), while thinking a little more.
If she only were a grown up, she could do whatever she liked. She wouldn’t have to spend her vacation each year at grandmother’s. And she wouldn’t have to watch over little Tommy, who knows how to be very annoying. How wonderful it would be. Magda was awakened from her daydreaming by Tommy, pulling her hair.
“Stop and go play alone for a while,” said Magda. “You’re a big boy, now.” She put him on the ground and shoved him forward—the right way, towards grandmother’s.
“But I want to play with you, to play hide-and-go-seek.”
“I don’t want to play. I’m big already,” repeated Magda, turning to her basket heaped with laundry. “My workload is full. I have to wash.”
“The laundry is for dolls, Magda, I want to play. I want! I want!” Tommy got up and stamped his feet hoping that he could somehow persuade Magda.
“Your whining won’t work with me. Try that on someone else.”
“I’m telling grandmother that you’re evil and don’t want to play with me,” threatened Tom. And because Magda was only wiser, she conceded.
She tagged Tom and yelled, “You’re it!” and dashed away. Her brother, understandably, ran after her, but he couldn’t catch up. He began to whimper and huff because he didn’t like it. Magda then slowed down, allowed Tom to tag her and then chased him. If she’d wanted to, she’d only have had to take one or two steps and would have been right behind him. But she then thought about it and slowed to a snail’s pace and asked that he wait, saying she couldn’t reach him. The boy liked that, smiled and shouted that he was the fastest in the whole wide world. He was still young, believed in such stupidity and it didn’t take much to entertain him.
“I’ve had enough of that, really,” muttered Magda, taking a step and grabbing her brother by the hand. „We’re finished. I got you already.”
“But it took you a long time. I am very fast, aren’t I, Magda?”
“Sure. But I’m going to do laundry now. So don’t distract me and go find grandmother. Maybe she has some kind of goody for you at home. Go ask.” Magda used a reliable ruse, that she knew would work. Tempting brother with sweets was very easy, even this time. Tom ran off to grandmother, Magda picked up the laundry basket and went to the wooden tub where she could most easily get her work done. She took the first section, soaked it, properly scrubbed and rinsed it. Pillows, sheets, sweaters and dresses—all ended up in water.
“Magda, do you want the candies too?” Tom said from behind her back and stuck a small bucket under her nose.
“Grandmother gave you that much?” wondered Magda. She got scared at first that Grandmother had filled for him a full load of candies. Fortunately he had only a few. She hesitated, but then she took a couple.
“Aren’t they good?”
She nodded and then asked politely if he would help her. Luckily, he politely turned her down. She continued to submerge laundry into the tub while watching Tom from the corner of her eye. He walked around the pond, sat on the ground and took to the cookies. Magda contentedly continued with her work, and when after a while she looked at the opposite bank she couldn’t believe her eyes. Tom was lying down and it looked like he’d gone to sleep. Could it be that she’d have such luck and was to have a while of peace from her brother?
She quickly tossed the wet laundry into the basket, returned to the bank and, piece by piece, hung the laundry on willow branches. They were much better than string for which laundry would need clothespins. There are enough branches to hold them up so the sun can dry everything. She put the basket on the ground and ran to her brother. A few meters from him she forgot, tip-towed and held her breath, so as not to wake him up. She stopped next to him, threw her hands up in rejoice. He really had fallen asleep. He had not even eaten up all the candies. Before he awakes, she must set ants upon him. Magda looked about, moved to the side, plucked a large leaf that had covered the bucket. It probably wouldn’t work against ants, they are small and stretch out, but flies are prevented from getting in.