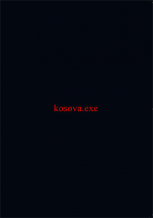 At the Academy of Arts in Prishtina from 1990 it wasn’t possible to study in the building dedicated to the purpose, in the center of town, because of the violent usurpation by the Serbian police. The academy was forced to move to cold rooms in private homes in the outskirts of town without any normal scholarly conditions.

This kind of school was rather a kind of passive resistance against the then Serbian regime; as a consequence, the scholarly level was rather weak.

During this time professors continued to discuss modern art of the seventies and eighties and, wanted or not, ignored the more recent trends in art in the world.

At the end of the last decade, a new generation of Albanian artists achieved its first successes with the international market: Sislej Xhafa, Anri Sala and Adrian Paci with their works and access to some recognized galleries and museums influenced the development and education of Prishtina students more than all their professors.

In these circumstances (not forgetting the terrible experience of a destructive war), the youngest generation of artists emerged who, thanks to the internet and print media, began to take an interest in more recent events in the world of art. And they attempted to understand the international success of Xhafa, Sala and Paci, and the unconscious effort to similar stature.

The exhibition called kosova.exe represents an attempt to absorb and comprehend the ideas and visual expressions of these youth, whose work characterizes dealing with the harsh reality of their land which faces continuing  social and political problems in a context where the aspiration for a better future continues.

The artists exhibiting (Albert Heta, Dren Maliqi, Driton Hajredini, Jakup Ferri and Lulzim Zeqiri) work with irony and play with provocation that directly touches on our sensitive beings and simultaneously with their own way don’t leave us indifferent to the events that define our daily existence.